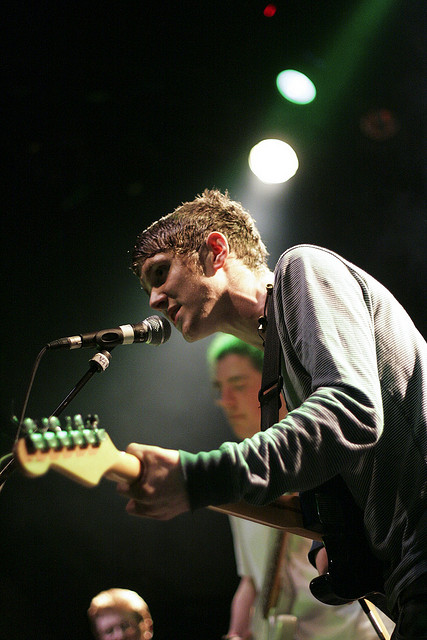 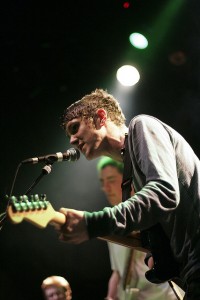 COMING TOGETHER in the same room is the single biggest struggle Gran Casino must have. There is an unusually large number of musicians in the group, but this is solely because of the band’s variety of musical instruments – from the standard guitar and drums to the more glamorous brass, woodwinds and harp.

“On paper there’s 15 of us, but there’d be about twelve on set,” explains Caimin. It certainly spices up the currency of bands that are now circuiting Dublin’s clubs, providing a certain exotic element which hasn’t been seen since the Dubliners’ mish-mash with the Pogues.

Not that Gran Casino are a traditional band though – far from it. They specialise in progressive-rock, and not the kind that provides run of the mill grotesque boredom – nay, more the type that wistfully locates intrepid melodies, beautifully sustained by the reflective pattern of the vocal melody, which is soft and austere, rather than intrusive and monotonous.

Yes, this band is one that saw the staleness of the Dublin scene and introduced to it freshness in the form of angel trumpets and devil trombones.

“We vowed that we would never play Doran’s again”

“We only ever had about three or four full rehearsals where the whole band was present, because it’s so difficult organising anything around everyone’s timetable.” But as the band primarily consist of classical trained musicians, all of whom are in various different outfits of the trade, Gilmore relates that “when working with a lot of people who are used to playing classical music, it’s handy that you can just notate stuff to them.”

However, he insists that the band is only classical “instrumentation-wise” and that they would only let some music of the genre influence them.

This week sees the band record their next EP in Cardiff, which will eventually lead up to their first album, if all goes to plan. “Of course, it’d be nice to be signed because you’d get loads of gigs all the time, but time-wise at the moment, we’re all in college so we’re just doing a few gigs, having a laugh.”

They are committed despite the minor set-back of their third-level education, and have a desire to realise their full potential when they “get out”. “If it was a job and you really want to make it, it really has to be a seven-day a week thing in order for it to work. Plus, we’re all going away for the summer, but we will be getting serious when we’re finished up.”

But before they jump across the pond to record their new material, the band is set to play a few gigs here in Dublin. “We vowed that we would never play Doran’s again, but there’s an American band called Nightmare Of You coming over whom two members of the band loved when they were eight, so when the promoters asked us to play we’d said we’d fill the slot.”

So all their fans have to do now is wait patiently while they earn their degrees and (hopefully) come together in a room near you.